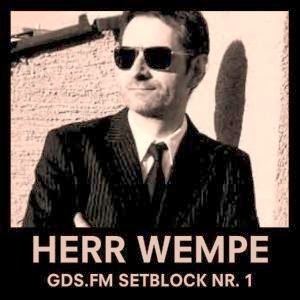 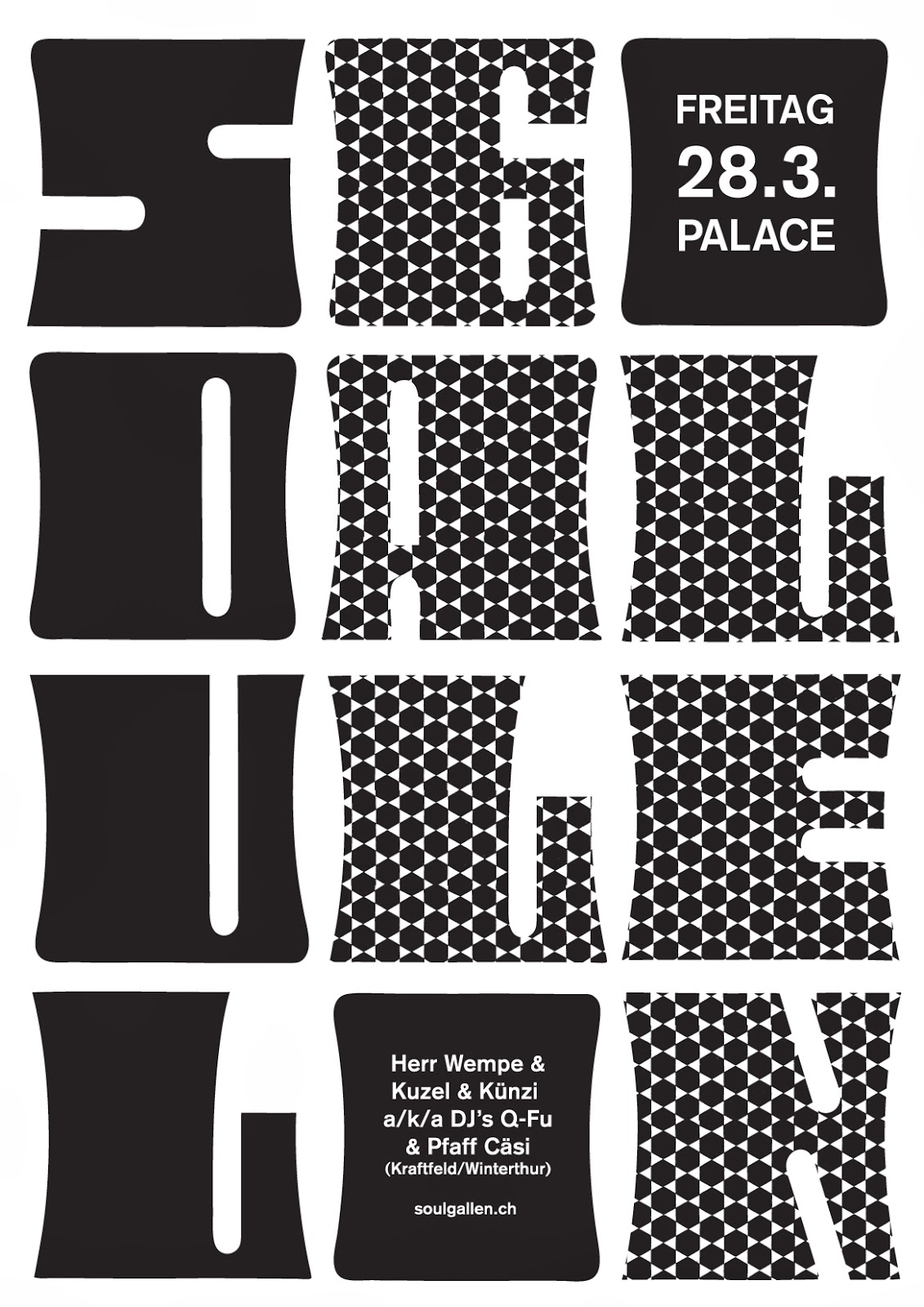 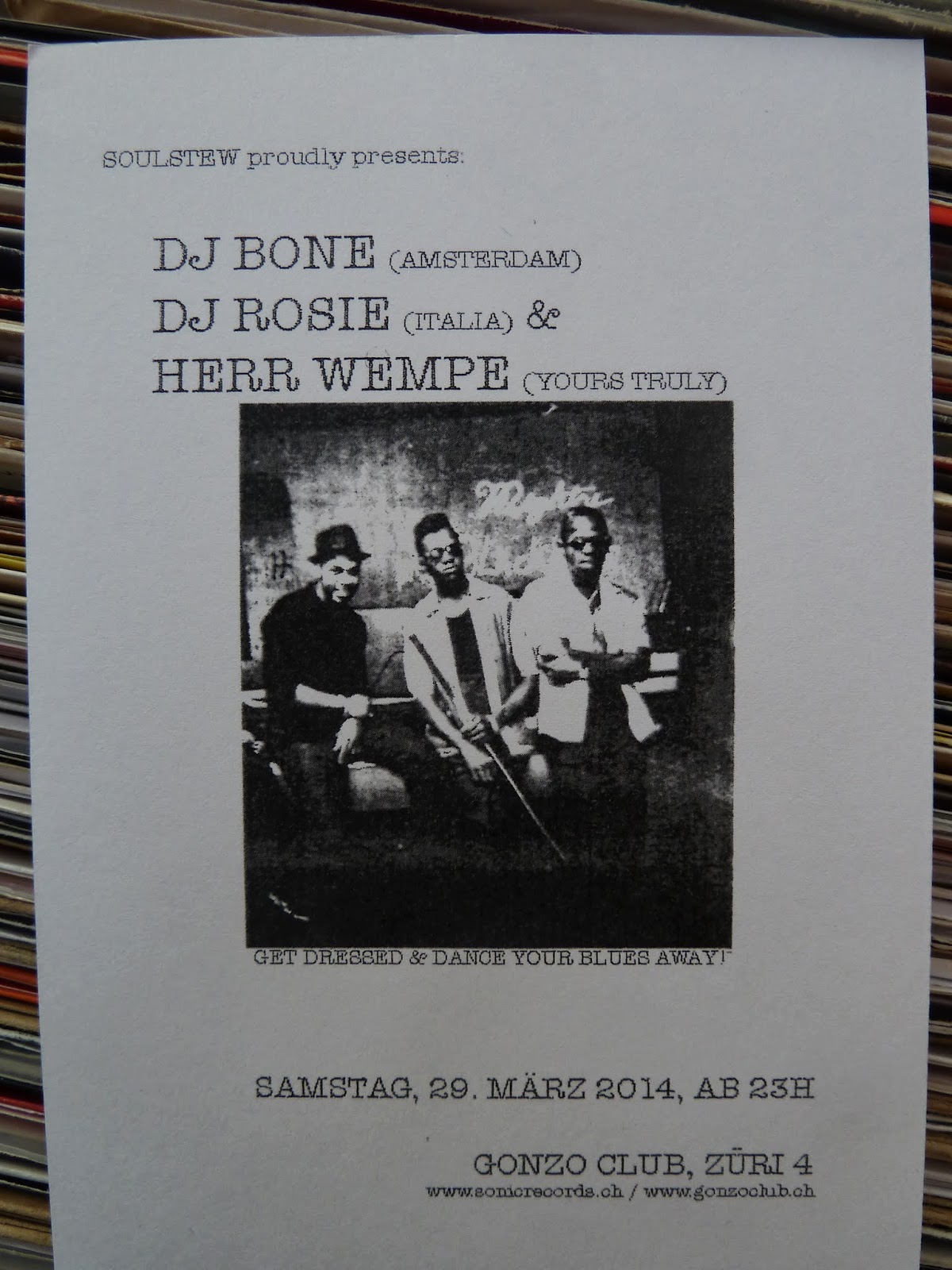 SOULSTEW proudly presents:
DJ BONE (Amsterdam), DJ ROSIE (Italia) & HERR WEMPE (yours truly)
Wild Soul, Rhythm'n'Blues, Beat & Garage Shakedown!
Samstag, 29. März 2014, ab 23h
Gonzo Club, Züri 4
***
what's your name? where are from?
Bone, Amsterdam
what are you doing?
I'm filling out these questions!?
who influenced you musically?
The Gories
what was your first record?
N.W.A. and the Posse
what are your favorite records at the moment?
Signed D.C.  (60's Comp on Satan Records/1984)
THE ECSTACY OF GOLD 26 Killer Bullets from the SPAGHETTI WEST
(5 double lp's with the best of spaghetti western soundtrack music from 1965 till 1974!)
what's your best digging story?
Digging thru an old moldy box of Bollywood records on the streets of Bombay and finding (without knowing it!) the original GUMNAAM soundtrack (of Jan Pahechan Ho fame)
what's your favorite mix and why?
Margarita!!! gives you the best drunk in the world!
what's your favorite format? lp, 12", 7"?
7"
what are your 10 alltime favorites?
Tequila - The Champs
Surfin' Bird - The Trashmen
Wild One - Jerry Lee Lewis
Mellow Saxophone - Roy Montrell
New Rose - The Damned
1969 - The Stooges
7 and 7 is - Love
Human Fly - The Cramps
Psycho - The Sonics
Demoler - Los Saicos
(....but there's tons more, where that came from.....)
what's your most memorable dj gig?
the DJ gig the night after Wacko Jacko died and me with NO M.J. records...........I wont go into any detail as that was a bit too traumatic........
where & with who would your dream gig be?
A double bill with Link Wray and the Raymen together with the Tielman Brothers
in Paradiso (Amsterdam) in the 50's!!!
what's your favorite food & drink?
MAGARITAS!!!
any last words?
FREE MARGARITAS FOR EVERYONE!!!!!!!!!!!!!!!!!!!!!!!!!!!!!!!!!!!!!!!!
***
Eingestellt von Die nächsten Parties: um 09:44 Keine Kommentare: 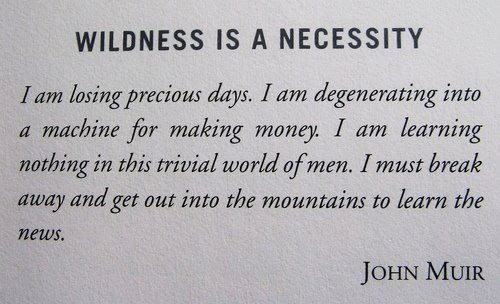 what are you doing?
i'm a promotor at the bonnefoi club in brussels
& i have a radioshow on fm brussel called "funky bompa and the wild"

who influenced you musically?
everybody

what was your first record?
angel dust by faith no more

& what was the last record you bought?
rajastan street music on sublime frequencies

what are your favorite records at the moment?
levon vincent - love technique (a slab of nasty house) &
acka raga by acker blick (oriëntal popcorn)

what's your best digging story?
finding "j'ai l'habitude" by lucky alba in the (brooms) closet of my nephews cleaning lady or finding an absolutely mint copy of "is there an exit" by absolute body control in a garagebox filled with übertrashed euro house '12

what's your favorite mix and why?
sunrise by psychemagik, because it's absolutely fuckin' perfect

what are your 10 alltime favorites?
sorry they don't exist

what's your most memorable dj gig?
club sarajevo in sao paolo (dj'ing with an ipod and cd's - people were screaming and dancing so hard they forced the club owners to stay open 2 hours extra)

what's the best concert you ever went to?
should be my first one I guess - red zebra in ninove - i stage dived and screamed my lungs out

where & with who would your dream gig be?
on a tropical island with my girlfriend

what's your favorite food & drink?
anything that is healthy and tastes good and any kind of fresh juice

any last words?
thanks for having me at the helsinki again, klemens!
Eingestellt von Die nächsten Parties: um 05:28 Keine Kommentare:

what's your name & where are you from?

my name is that fucking sara and i'm from all over the place.

what are you doing?

who influenced you musically?

the library in the town where i grew up - i could sit there for hours listening to records while reading books. thats  how i got introduced to the drums, the bass, the keys and THE FLUTE! and im really thankful for that, without that library i would have been a total different person (and prolly  a more social kid).

what was your first record?

& what was the last record you bought?

Dena "Flash" which i bought at her release party in berlin last week.

what are your favorite records at the moment?

There's a lot! But some of my favourites are definitely from buenos aires. In one record store i ended up dancing with the owner who was around 80 years old to some candombe record that he recommended me (and it worked, i ended up buying all of them). In another store they didnt had a turntable 'cus they had sold the last one but no problem - they just asked a random guy in the street if we could borrow one, so i could listen to the records before buying and he just went home and got his record player!

what's your favorite mix and why?

for ice cream it's chocolate and raspberry, its looks beautiful and it taste delicious!
besides that - coffee and cigarettes it's just the perfect relationship, jeans and sneakers - it looks great and it's comfortable, redwine and almost anything - basically because heavy dry redwine rocks.

what are your 10 alltime favorites?

what's your most memorable dj gig?

uhm, besides the one where they had removed the cables from the turntables cus they were in the way for the cd-players??? or the one where there was only one turntable and they looked at me like i was an idiot because i needed two (and a mixer).

theres is a lot to chose from but maybe the one where a girl jump up on the dj desk and danced like a maniac and bumped her face into a lamp and broke her nose, but continued dancing until the end of my gig with blood all over. and discovered that she was in pain AFTER the music stopped. That showed me how powerful music is (maybe some kinda drugs too).


what's the best concert you ever went to?

jay-z in madison square garden - NOTHING beats that. NOTHING!

where & with who would your dream gig be?
as a tour dj it would definitely be with jay-z and it could be anywhere.
but basically i really love djing with people that i like (who has nice records and respect for the culture) and that can also be anywhere. but i love doing festivals, you reach so many people and nobody in the audience cares about how their look or how they dance.

steak and champagne and heavy dry redwine. water is pretty nice too and all kind of potato stuff and pasta.

this is my chance to come up with something really deep and clever that could be re-posted on facebook i guess.
dang, i just blew it.
*** 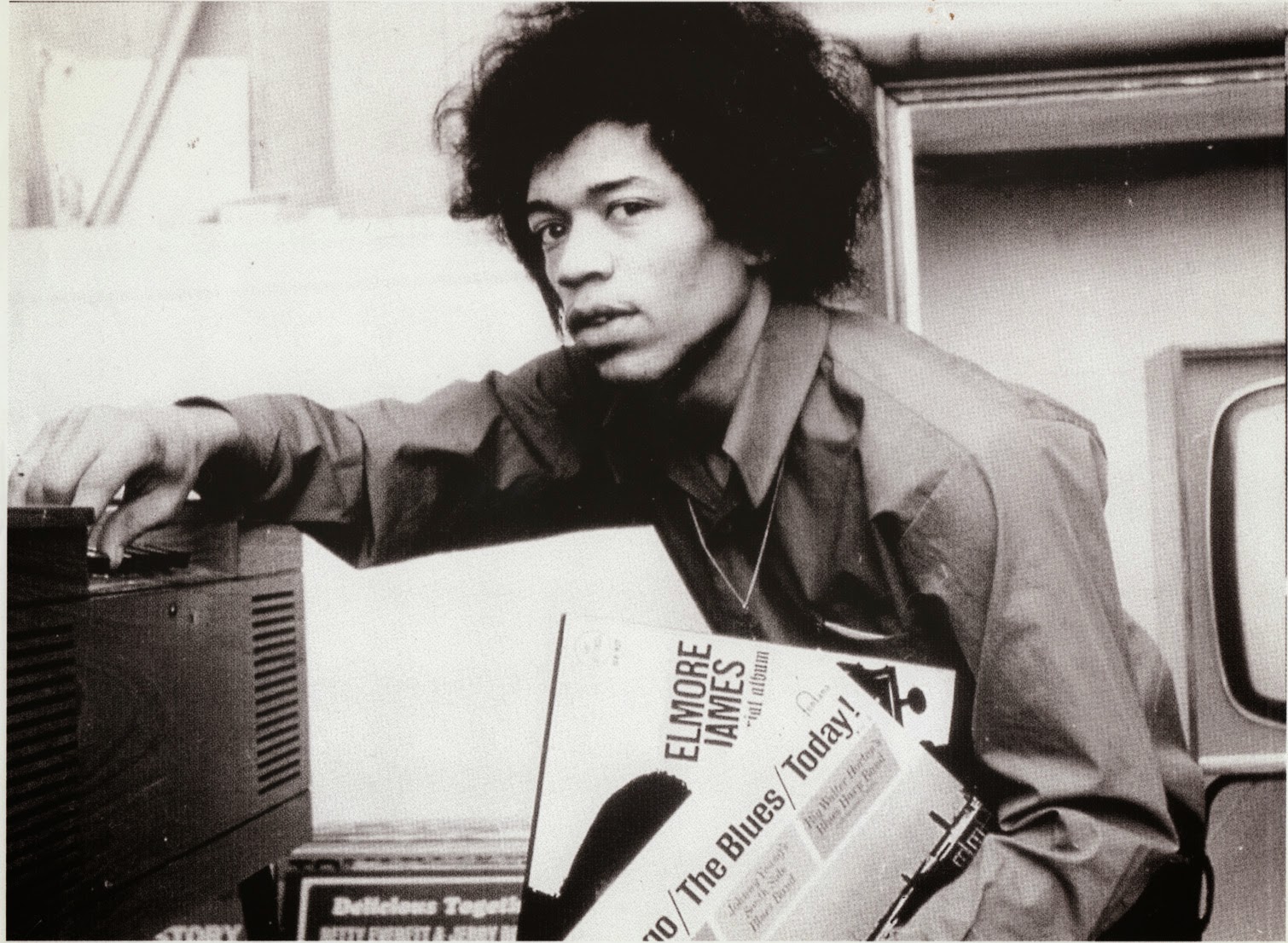 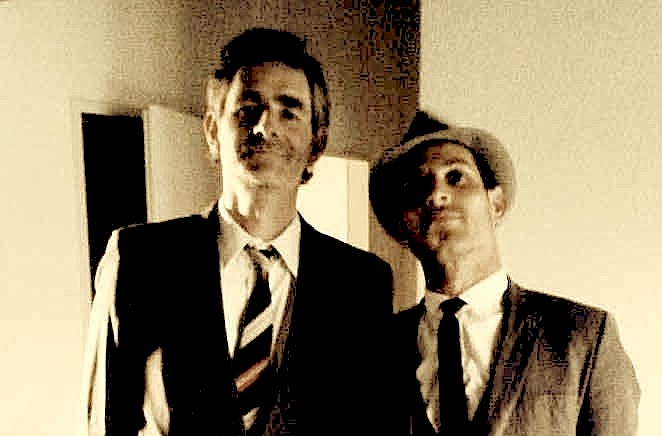 From Soul Gallen with Love
or
Get dressed & put on your dancin' shoes!

Wo du kommst her?
Planet 7inch 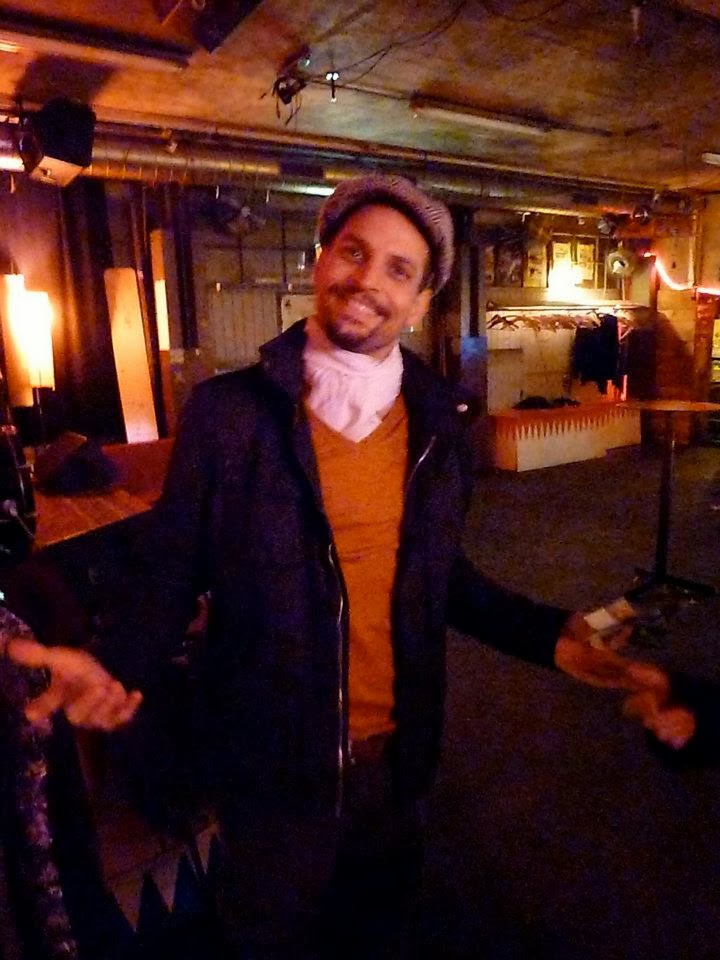 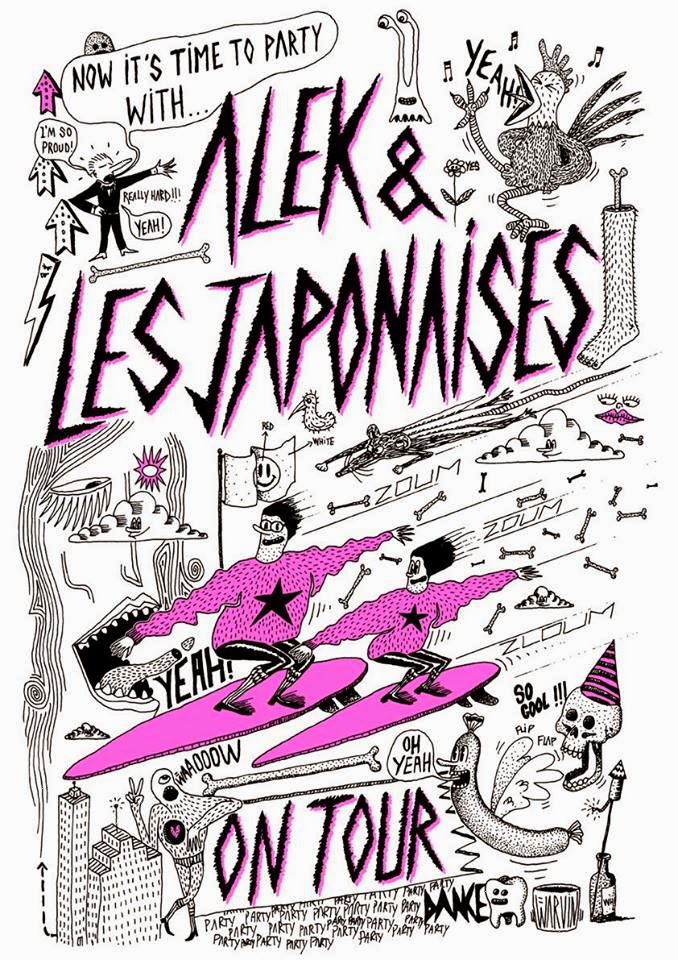 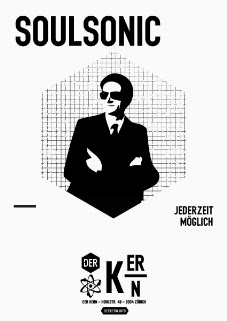