Around the world in 45 rpm 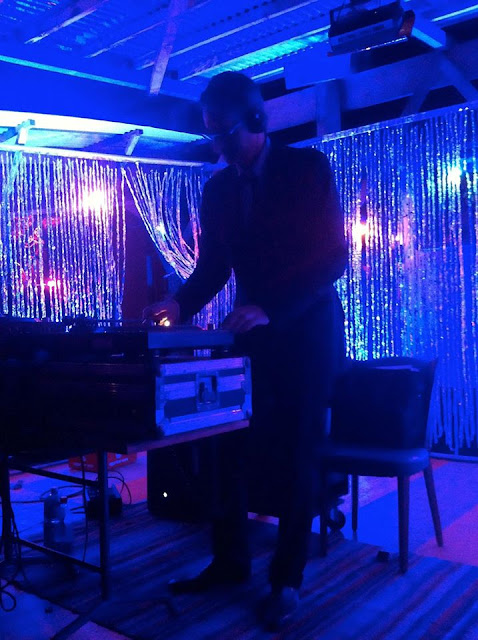 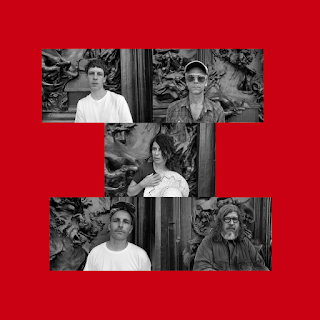 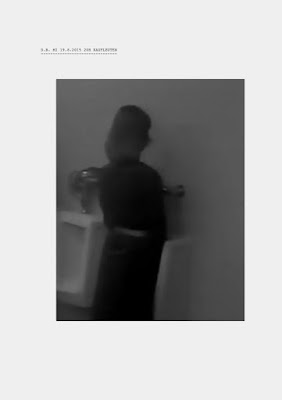 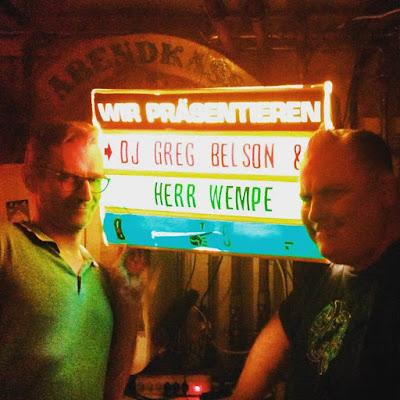 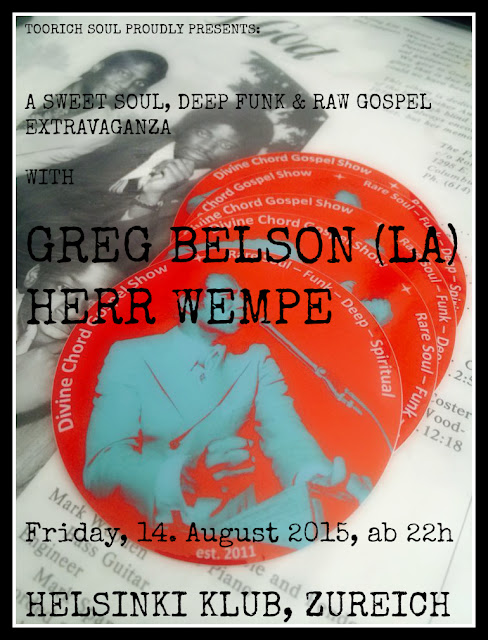 
Where are you from?


Kingston Upon Thames, just outside of South London, England.

What are you doing?
I’m a full time vinyl digger, record dealer and DJ specializing in rare soulful recordings. I’m currently on my European Tour for 2015, taking in over 50 dates around the UK, Germany, Spain, Italy & Switzerland.

Who influenced you musically?
I have potentially many musical moments that I could list as influential….if I had to narrow it down to a single artist’s body of work, it would have to be Mr Gil Scott Heron. His voice, delivery, personality and what he stood for as a human being, are truly inspirational to me. But I could list the work of jazz drummer Art Blakey, the production technique of Charles Stepney, the beautiful vocal styles of Minnie Riperton & Althea Davis, the craftsmanship of Terry Callier, the break through sound of golden era hiphop and likewise drum ‘n’ bass. If I hear something that touches my heart and soul, then I add it to my ever growing list of influences.

What are your favorite records at the moment?
Right now, I simply adore the work of the Little Shadows, a gospel group out of Florida. Their 45 on the Mission label ‘On judgement day’ is one I’ll take to my grave. For DJ’ing, the rare soul crowd enjoy Pervis Herder’s ‘Honkey tonk junk’ on Inner Ear, just as much as I love playing it. And for the gospel disco clubs, Betty Griffin’s ‘Free spirit’ on Mopres always raises a smile. I’ve been listening a lot to downtempo beats again recently, and have a passion for Massive Attacks ‘Protection mixed by Brian Eno on the Wild Bunch label, and also Kathy Diamond’s self-released ‘Miracles just might’. Sometimes you just need to unwind, y’know!

What's your best digging story?
This particular digging story goes back to the early 90’s, just before Keb Darge launched the infamous dance night ‘Deep Funk’. London clubland was vibrant and rich with so many superb sessions to choose from; ‘Quiet Storm’ @ Ormonds, ‘Talkin’ Loud’ at The Fridge, The Pig in Chancery Lane….the list was seemingly endless. One such session I used to frequent every Thursday at The Wag was called ‘Leave my wife alone’…..a night routed in Acid Jazz, but over two legendary floors, it was so much more. This is where I first met Mr Darge, playing behind a high riser DJ booth that you had to stand on a chair to look into it. Out of all the regular jocks that spun there (Bunny, Xavier, Russ K and suchlike), Keb’s brand of raw 60’s soul and funk with a hard hitting back beat is what appealed to me the most.

Tracks that went on to become Deep Funk classics all got an outing at ‘Leave my wife alone’; in many ways, it was an essential session for me. Hearing such awesome club oriented music in one of London’s if not the Worlds iconic venues, has helped shape my approach to my DJ sets today. And to give you an idea of the kind of cuts that were making the grade back in ’92 - ’93, here’s a little rundown of heavy hitters, all played on original 45.

There was one particular record though that Keb played every week that instantly struck a chord with me. Right from the get go, the intro screamed ‘Get on the dancefloor’…..onto a heavy blues oriented funk instro riff…..some hoopin’ & holler’…..and a bunch of breaks. Very tasty breaks.

I had to know what this dancefloor destroyer was the very first moment I heard it, so I shuffled up to the turntables to learn the goods. It was a sad moment to see Keb had covered up the label and wasn’t telling anyone the true identity of the tune. Week after week I tried to find out the artist, and week after week I was shoed away with a quick glance of the 45, still with the cover-up label attached. Covering up has been practiced for years and originally came to prominence during the reggae soundclash golden era, where each Sound System would often scratch off the label or simply cover it up with some different artwork etc. When you’re doing battle for musical supremacy, exclusivity is part and parcel of keeping your set original, and originality will tip the odds to your favour. C/U’s, used as an abbreviation, were also adopted by the Northern Soul scene within the UK, and that’s where Keb got into the habit of hiding the identities of his prized pieces.

Thursday rolled around one more time, and it just so happened that I was heading off to the United States the next day on a two week buying trip. I bugged Keb again about this record that I only knew as ‘The Cranberry’ funk instro 45 (check out the clip to find out why), and mentioned about my trip Stateside. My luck was in that night…..Keb took the label off and showed me the artwork. Yessir….finally…..the track with all the beats that made me airdrum in the club and had me shoutin’ ‘James Brown’s been around!’…..was by The Golden Toadstools, called ‘Silly savage’ on the Minaret label. During the unveiling, Keb looked at me and said, ‘There ya go laddy, find me some of those!!’ Armed with the info, I hit the Midwest and got diggin’.

We ended up in St. Louis, having a look around Electric Ladyland Records….finding a few pieces, but nothing mind blowing. I got to the checkout desk where a portly ginger haired gent was manning the till. The guy looked straight out of Woodstock with a 60’s style haircut, round rim glasses and sporting a vintage gig tee shirt. He decides to mention that he’s got a basement full of records that I could look through, after he shuts up shop. We arrange a time, confirm the location, and it’s on!

His house was out in the ‘burbs, but looks safe enough…..the basement on the other hand, was pretty harsh. In the corner stood a dysfunctional slightly smashed toilet throwing out an interesting aroma…..two of the hairiest cats known to man paraded the floors and the records, coating most of the discs in cat hair, and areas of the floor in yacked up fur balls. It wasn’t exactly hazmat territory, but everything was handled with kid gloves, to say the least.

I get into a lane and find a coupla things, move across to the second stack, and much the same…..and then it was onto the middle of the rack. Yeah, go time…..I find one glorious copy of The Golden Toadstools, minty fresh, purple label stocker. Today was a good day! Then I flipped past a few more also rans, and stumbled on another copy…..hearts fluttering. I’ve got two copies of Keb’s cover up!! I keep flipping and copy number 3 lifts its head, then 4, and onto 5…..I ended up bagging 14 copies. And the nice little cherry on the cake was a minty demo of Jackson Sisters ‘I believe in miracles’ on Prophesy at the end of the lane, just to confirm what a great hit it had been. Then the nerves kicked in…..what was he gonna charge me for all these? I mean, it’s a huge disc in the UK right now, so surely it’s gonna break my bank. Nope….2 bucks a piece, and the guy asked ‘Ya’ll need some more copies of The Golden Toadstools?’ in a thick Alabama drawl. I said ‘Yeah’ but for some reason, we never returned. I just paid pronto and got out of dodge with the feeling in my stomach that I’d just come up big!

When I arrived back in the UK, I told him the news over the phone…..which was greeted with a mighty ‘F*ckin’ hell!! I’ll have those off you!!’ The next day, I drove to Keb’s with 10 copies and we hammered out a huge trade with him offering me some fantastic (and expensive 45’s) that I still own today. He went on to sell and trade his copies for undisclosed sums around the globe. Today, you can find a copy of The Golden Toadstools fairly easily for around $40 mint, but in the early 90’s, this record commanded some serious attention. A perfect example of right time right place, and a dig that I’ll always remember that given the context, was quite possibly my greatest single 45 come-up ever!

What's your most memorable dj gig?
I’m lucky enough to be part of the Block 9 crew who operate a fantastic field at the legendary Glastonbury Festival, once a year. Every year I DJ at the NYC Downlow stage, it always ends up being my standout gig of the year. Hot, sweaty, smiling happy faces, all dancing to 100% gospel disco…..some of the most uplifting music to ever hit the turntables. It’s a beautiful setting, run by some of the most beautiful people in the business. Honest and pure, and that’s not often the case, these days.

What's the best concert you ever went to?
That would be hands down the first ever entire JB’s Family Reunion, at London’s Town & Country Club in 1987. All the classic band were right there on stage with the exception of Bootsy Collins….Marva Whitney, Lyn Collins & Vicky Anderson, with Bobby Byrd conducting the whole show. And what topped it off nicely for me, was getting a big hug from Vicky Anderson, mid-show. They played live for close to four hours, just loving the moment. Unforgettable gig.

Where & with who would your dream gig be?
Sister Rosetta Tharpe, backed by Jimi Hendrix, John Entwistle & Mitch Mitchell….plus a bunch of other ‘super group’ style acts, all voiced by gospel artists. Who knows if it would work, but I’d have a lotta fun organizing it and finding out. Somewhere secluded, like Richard Branson’s ‘Necker Island’ or suchlike. With a PA rig the size of small country…..yeah, something like that.

What's your favorite food & drink?
When I’m in the UK, my favorite food is always served up at the best Curry House in Surbiton, Surrey….The Red Rose. I’ve been visiting this place for over 25 years…..just so good! I’m not really much of a ‘drink’ person, to be honest. Just recently discovered a beverage called ‘Opihr’….it’s a spiced gin that’s very tasty mixed with tonic water, when the mood strikes.

Any words of advice?
Be confident in your own taste and don’t follow too much what others say might be a good record. Listen to it f’sure, but base your opinion on your own judgement. Music is a very personal journey and it’ll be a different experience for everybody reading this piece. Make it yours and don’t ever second yourself into saying something that you like, when it’s really not to your taste. Listen to your heart, mind and soul….the rewards are infinite!
***
https://www.mixcloud.com/gregbelson/
https://soundcloud.com/soulsonic1 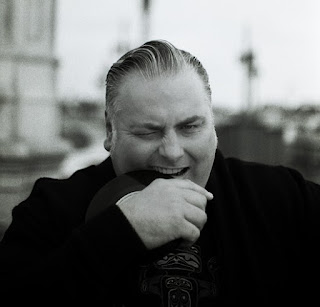